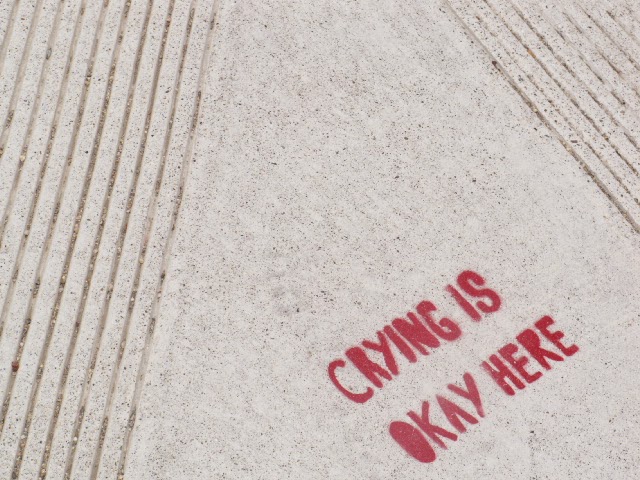 One of the things that has happened since my boyfriend’s suicide is that I’m carrying the burden of not only my own skeletons, but the skeletons that he left behind. It’s a heavy burden to bear and I’m constantly reminded while I navigate this grief how it’s really a two steps forward, three steps back process. This grief, in particular, leaves a series of stones that need to be turned over with the contents beneath it inspected carefully. Especially if you’re someone like me who already moves through life trying to find answers to some of life’s most perplexing questions. It’s also very easy to reach a place prematurely where I’ve thought, “Wow, I’m doing okay today (or this week),” as I’ll seem to manage myself at work and go a week or two where I haven’t had “the conversation” (the one where I talk about it with a stranger or a friend). There are the days where I feel okay or I think to myself, “Am I really moving on with my life?” Which I am, but it isn’t something that happens overnight, and I tend to be the type who enjoys being productive in regards to my own healing. Then there are the days where I wish I could just stand in the middle of my office and scream at the top of my lungs “This is what’s going on with me! And will someone take a moment to stop and listen?” But while I’m burdened, do I really want to burden others? And the more important question becomes, “Why do I feel like I would be a burden?”

But I already know that answer.

If I lived in Indonesia, where I have traveled, the men would be getting their teeth filed come July in preparation for the month-long cremations in August. As a culture, we’d have time to look forward to the time when we, as a society, were going to deal with death as a whole. But unfortunately for me (and trust me, I’ve traveled enough to know that I’m fortunate to be an American), I live in a culture who would rather exploit death through images and movies than talk about it. Death is a downer. And suicide? It’s a secret. I still find myself whispering when a girlfriend and I talk about it over chips and guacamole at lunch at the Ferry Building here in San Francisco. But then I get angry that I feel like I have to do that, so while I’m on the bus, I pull out the book my therapist just leant me by the Father of Suicide himself, Edwin Shneidman, entitled, Suicide as Psychache: A Clinical Approach to Self-Destructive Behavior and slyly peer at other bus riders to witness their reaction. I guess it’s my own way of seeing if anyone will notice, or even better, start a conversation. It’s also my way of flicking my society off for being so scared to and of death.

And no matter how much my friends and family wanted to be there for me, they hadn’t walked in my shoes. They weren’t still plagued with the questions. They have gone on with their lives. They don’t think about this suicide or are touched by it quite like me. But once in awhile, I’ll be reminded as to how good other people can be in the wake of such tragedy. People will exemplify the best of humanity. It’s these moments that keep me going through this.

Last night was a tough one for me. I went to see my Suicidology therapist. She’s studied Suicidology for over thirty years and is doing a great job educating me on mental illness, medication, depression and what stuff I need to look at and what stuff appears to have been out of my control. At times, I feel like the college student I wish I had been, questioning her for answers in a realm where I never thought I’d roam. It was also a session where I let out one of the many secrets that I am still holding. The intimate moments between my partner and me where we sat and cried and each wondered to ourselves, or aloud, “What the hell is happening here?” I told her about the last time I saw my partner, how he crotched down on the front porch of my apartment and just cried. How I just sat there DYING to reach out and hug him and take him and tell him I would make it all okay, but knew that I had done all that I could do for too long of a time. It was the first time in a long time where he told me, “You look so beautiful.” I wondered why it had taken him years to be able to say that to me. Why it took hitting rock bottom for that thought to be shared, for when I ever asked to hear that, to get a clue as to if he ever felt I looked pretty, he said it came off as me being needy.

The tears came in drops, then they came as waterfalls, and the emotions that I had thought had been worked through bubbled to the surface like the geothermal land we had lived near which is always waiting to erupt.

“I guess I still have a lot of emotion. I don’t think I’ve shared that with anyone.”

I surprised myself. Here I was, an open book, who would say to my friends, “No, please, ask me questions and if I feel up to it, I’ll answer.” This would eventually lead to, “Ask me anything, please,” once I felt safe enough.

My therapy session came to an end. I walked to the bus stop and waited for the bus to take me to Benihana where I would be meeting three of my girlfriends for dinner. We had planned the dinner months ago, with Benihana having a celebratory effect on us all. We had traded cute emails about how excited we were to order Rocky’s Choice, or to get that first taste of soy sauce. And for the salad with that special dressing. My boyfriend also happened to have thought that Benihana had the best Green Tea ice cream he ever tasted. I agreed.

I called one of my friends. I wasn’t sure I could make it.

“No,” I said. “I’ve been waiting for Benihana for a month. I’m just calling to warn you and the troops that I’m not doing very well.” She was soft and told me not to worry. It felt good to do this lately, warn people when I felt like a wreck so that they could prepare or opt out before I did. Then a large African-American man pulled up in a Nissan 300x with the T-top off. He had an eighties Mohawk, smoked a cigarette and was blasting Lionel Ritchie’s “Penny Lover”. It made me smile and realized that I had to go, if only to tell this scene to one of my friends I was meeting.

I got to the restaurant before them and ordered a glass of red wine (though I haden’t been drinking lately since it usually just made me feel more depressed than I may or may not have been). They came in happy and buzzing from their earlier rendezvous with their own wine. We went to the community table awaiting our succulent shrimp and smoking onion volcano trick by the chef. All of the Benihana chefs are now Latino, a change from the Japanese chefs from ten years ago (many of us had been going to Benihana since we were little). So we cracked jokes, calling our table chef “Alejandro-san”. I was laughing within moments, and it wasn’t because of the one glass of wine.

My friends, one-on-one, have been there for me to talk about the suicide. Some have been amazing, while others have, at times, disappointed me with their ignorance. But for the most part they have been great big ears for listening and thumping hearts that care. And many times, like life, they have surprised me.

This was one of those times.

One of my friends said, “Is it time to give Amanda our presents?” And they all giggled like little girls and shuffled their hands into their pockets and purses. “Yes!” the other two chimed in unison.

“What?” One of the friend’s birthdays was next week, so I didn’t understand. “Why me?”

“Sit here.” They moved me around to sit in the middle of them. I looked around at the hundred or so people now filling the community tables at a very public Benihana.

My first friend took the humorous, yet sweet, approach, and read from a piece of paper.

Then she recited another...

One must first dream then act out.
Small but strong she grows.

Another poem was written on a card by my second friend...

Let your heart be true.
Let your eyes be open.
Relish the rain and sun.
Forgiveness is our road to true compassion.
Love yourself.
Honor all.

Then she followed it with one of her favorite quotes...

Finally, she handed me a pink crystal rock. “This is your gratitude rock,” she said. I looked at the strangers looking at us from the next table and started to cry.

The third friend opened up a poetry book from the 1940’s that she had picked up at a garage sale after skimming through it and read the following.

“When you called we knew we had to do something,” she continued. “So we said, ‘Okay! We have fifteen minutes to do something for her’ and we broke to our separate corners and came up with these.”

I sat in awe. I was in the presence of tiny bits of kindness, which were around me all of the time, just waiting for me to admit that I couldn't do it alone.