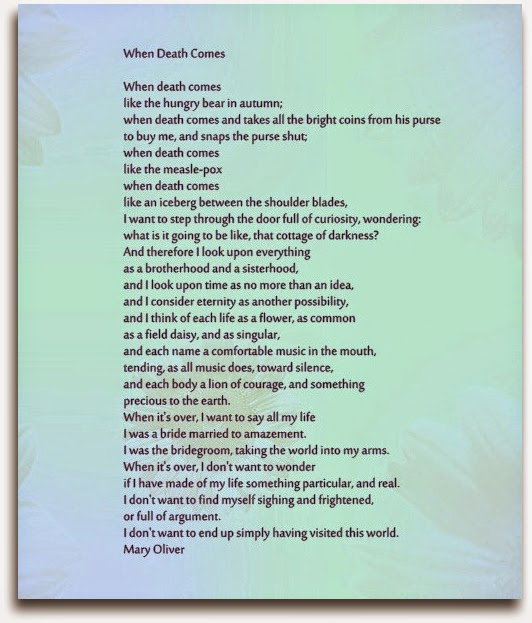 One of the gifts that has come out of my grief is the concept I've called collaborative grieving. I think of collaborative grieving as the opposite of isolation in our grief process. While the unspoken message in our society is that grief is something to process in private, outside of work hours, and as quickly as possible to return to someone's version of normal, I chose the opposite. I grieved out loud, in public, in workshops, with strangers, and now I feel free of my suffering because I had to do so.

In the rest of the world, collaborative grieving is ingrained in ritual and in culture. When I traveled alone through Asia for two years in 2000, I discovered grief was a part of daily life. There grief is not something to fear, or quieted to exist merely in life's shadows. Death and grief happen in community - and it is shared and processed out in the open among its members. In Indonesia on the island of Bali, processing death even has its own month - August - where villagers have their teeth filed, the dead body wrapped in a white sheet is placed on an altar to be carried by its community, and the body burns while its ashes float over loved ones into the tropical air. When I stumbled on this ritual during the month my parents visited me on the road, my father became uncomfortable - frustrated even - while I had to remind myself not to stick out my tongue, as if catching flakes of snow. I like to think that moment was my personal foreshadowing, as to how I might arrive at my personal place of comfort with death.

But being in Asia didn't bring me to collaborative grieving, or to sit on my comfortable cushion with death. It just gave me a glimpse into the concept. I had to struggle and grieve myself - and bring what I was experiencing after my boyfriend's suicide into my community - in order to find solace.

I met Marissa Krupa, the creator of The Spoken Coast Project, shortly after Bryce's suicide. She most likely knew me as the girl in a heap of emotions who cried out my sorrow to strangers. Fortunately, I was able to return that gift of listening when she learned that her mother, and her brother, were both diagnosed with late stage cancers. Marissa went through her own grieving process - and continues to do so - through her project. Her brother, Mickey, unfortunately died early this year. But the way her community failed her in her grieving process prompted Marissa to look at her own life, and to make the necessary changes in order to honor Mickey's life as well as her own. She was laid off from her job, but she chose to leave the corporate sector that abandoned her to properly grieve her brother and find her own hope. How is she doing that? By climbing every peak Mickey climbed - from Alaska to Tierra del Fuego. She is feeling all of her feelings, as well as interviewing people about their own grieving process between each climb.

Marissa interviewed me this summer, and what arose from the ashes in my interview - and in all of the people she has interviewed in her path - was this trailer to introduce her project. It's about a fifteen minute film. And it's about death. But most importantly, it's about how we think we are grieving as individuals, but it's our collaborative grieving that creates the healing we have worked so hard to live with today. Please watch and enjoy. And if you are so inspired, please donate some dollars or some airline miles to her project so that Marissa can continue this very important work. She needs it. I needed it. America certainly needs it. And I imagine - that one day - you will need it too.